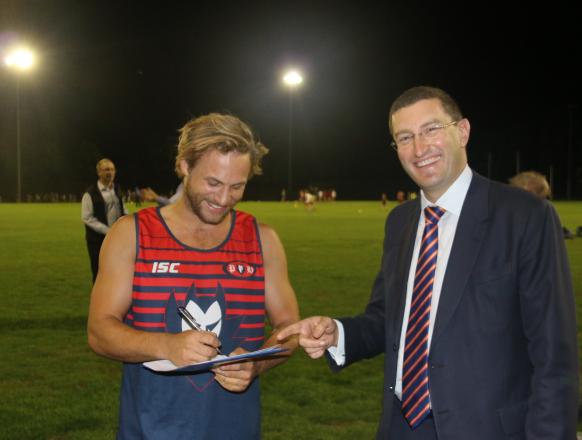 Federal Member for Berowra Julian Leeser MP and the Greenway Community Sports House Committee have thanked the Hills Shire community for their support after securing 1,000 signatures on their petition to upgrade Greenway Park.

To mark the milestone, Mr Leeser attended Thursday night training at Greenway Park where he addressed Pennant Hills Demons players and collected more signatures to take to his colleagues in Canberra.

“The #UpgradeGreenway campaign is one of the most important things I’m involved in for our community. This is a campaign to make sure there are decent facilities, a decent club house and a place for community gatherings,” Mr Leeser told the Pennant Hills Demons squad.

Mr Leeser credited The Hills Shire Times and The Hornsby Advocate as crucial to the campaign’s momentum and is now encouraging everyone who has not yet to sign the petition to show their support.

“We need every Cherrybrook resident to sign the petition. I need your help to convince my colleagues in Canberra that this is a project worth spending money on.”

“We’ve been overwhelmed by the support received so far for our #UpgradeGreenway petition. While we have over received over 1,000 signatures in a short timeframe, we’re still looking to grow that number so in turn we can grow Greenway,” Mr Hare said.

“Over the coming months, the clubs here will be building awareness and publicity surrounding our push and continue to meet with Julian as we collaborate on this important community cause.”

The seven sporting clubs that call Cherrybrook’s Greenway Park home that have united in a push to secure federal funding for a Greenway Community Sports House are:

The clubs are seeking $2.7 million in funding to construct the Greenway Community Sports House, which would directly address problems including: