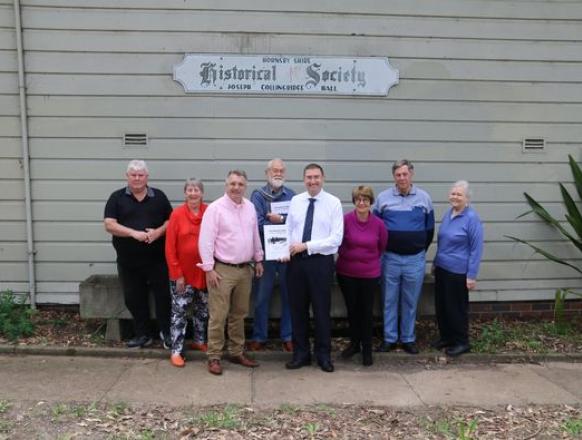 Thank you to the Hornsby Shire Historical Society for hosting the launches of two superb compilations of our area’s history. It was a pleasure to speak to the society’s members on Nathan Tilbury‘s book ‘Our Bushland Shire’, compiled by local history researchers; and on Robert Green’s book ‘A History of Asquith’.

I recently gave a speech to Parliament on these two fantastic contributions to the Berowra electorate’s historical archives which you can read below:

Local history books provide an important record of local events and communities, and I am proud to have many popular historians in my electorate who ensure our community’s history is recorded and passed down to the next generation. Today I’d like to highlight two local history books recently written for the Hornsby Shire Historical Society.

The first book Our Bushland Shire—the Story of Hornsby Shire, published in March this year, is a compilation of local history research from the district. Contributors to the book include Tom Richmond OAM, Councillor Nathan Tilbury, Ralph Hawkins, Derek Woodlands, Rosemary Curtis, Gillian Diekman, Elizabeth Roberts, Mari Metzke, Patricia Dewey, Julie Debray, Mariana Landeo and Robert Green, and the foreword is written by Philip Ruddock. Our Bushland Shire—the Story of Hornsby Shire has a chapter on every suburb in the shire and focuses on key landmarks, vibrant communities and the transformation as the shire has gone from rural lands to being part of metropolitan Sydney. The book includes chapters on the Hawkesbury River; the communities of Dangar Island, Bar Island, Marramarra Creek, Wisemans Ferry and Milsons Passage; and the Old Northern Road and the suburbs along this historic road from Castle Hill and Glenhaven to Dural, Glenorie, Forest Glen, Canoelands, Maroota and many others. There is also a chapter on the Hornsby train line, tracking the progress of the rail corridor and the development of neighbouring communities. This book is a fantastic resource for locals, chronicling important changes in our region.

The second book I want to mention is A History of Asquith NSW. This two-volume history book, written by Robert Green, covers 160 years of the history of the suburb of Asquith, named after the British Prime Minister Herbert Henry Asquith in 1915. While Asquith is a relatively small suburb of 347 hectares, with a population of approximately 3,500, it is rich in its history. Green’s book is the result of three years research and records details of the first land grants and subdivisions, as well as the early struggles as the pioneers cleared their land, established orchards, raised families and transported their produce to the Sydney markets by horse and cart, which at that time, extraordinarily, was a two-day return journey. The construction and opening of the Northern railway line in 1887 saw the beginning of the development of Asquith. Partial land resumptions reduced the numbers of orchards in the area and saw the growth of community organisations, including the establishment of six churches in the early 20th century. The Asquith Shopping Centre buildings on the Pacific Highway are mostly unchanged since the 1950s and 1960s. However, there has been significant growth and change in the area with the construction of many high-rise apartment buildings over the last five years. The book contains 18 chapters, covering land in the state, subdivisions, how Asquith was named, and a history of the suburb’s streets, shops, businesses, transport, sporting and community organisations, parks, playground, churches, schools, government utilities, industrial answers and housing statistics. There are stories about accidents, incidents and crimes.

I commend the Hornsby Shire Historical Society for their outstanding research and captivating writing and the development of these invaluable historical research resources. Thanks for your time and investment in the future.