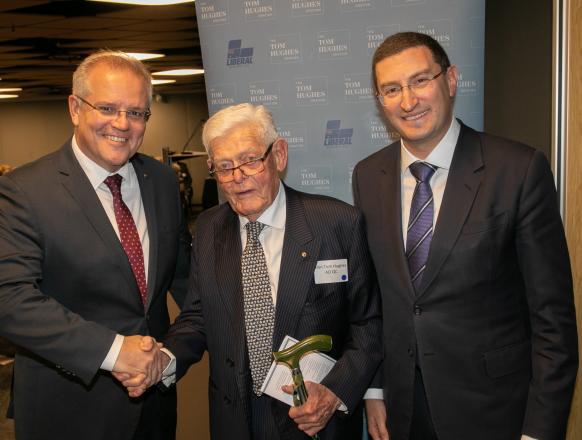 “This is now the third Tom Hughes oration we have held, continuing the tradition to honour Tom Hughes, the first member for Berowra,” Mr Leeser said.

The Prime Minister addressed national security and the government’s priorities when it comes to the safety of Australians, which he reinforced was the first duty of every Prime Minister.

After distinguished war service in the Royal Australian Air Force in World War II, Tom Hughes was called to the Bar in 1949 and took silk in 1962. Mr Hughes entered the Federal Parliament in 1963 as the Member for Parkes, before being elected to the newly created seat of Berowra in 1969. He went on to serve as Attorney-General and one of Australia’s most celebrated barristers.

“Having played his role in securing our peace and defending our liberties, as part of that great generation Tom brought to his public life his role, a very special insight and importance to Australia’s national security.  But also as one of Australia’s sharpest, most passionate, deepest thinking legal minds he also understood that to protect our national security, you must also value and preserve the freedoms you are seeking to protect and of course in doing just that,” said the Hon Scott Morrison MP.

“We will always, in my government and the government I’ve been proud to serve in now, draw on the great example of Tom to ensure that we continue to keep Australians safe because there is no greater responsibility and no greater privilege.”

“It is my honour, as the fourth Member for Berowra, to follow Tom Hughes, Harry Edwards and Philip Ruddock. I am conscious that while each of us is different, my predecessors have each been men of integrity who have served our Party, our community and our nation well,” Mr Leeser said.

“It is a large legacy and Tom set a high bar when he became the first member for Berowra.”