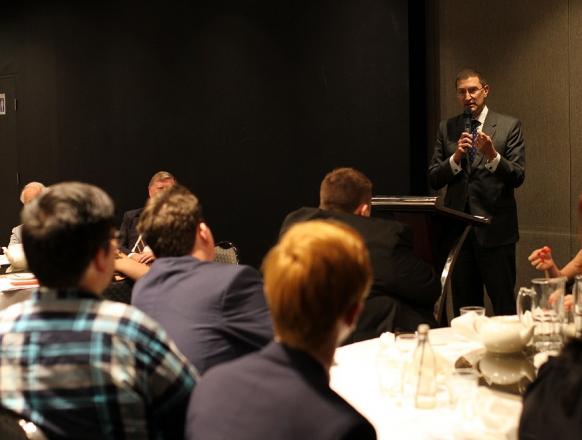 It is an honour to have been invited to speak at the Chinese Australian Services Society today.

Let me acknowledge Henry Pan the founder of CASS and Tony Pang Chief Executive of CASS.

I am grateful for my friendship with both of them and with the broader Chinese Community leadership, some of whom have been my friends for two decades.

I am very proud that the most vibrant community association in my electorate of Berowra is the Cherrybrook Chinese Community Association led by the indefatigable Jenny Lau.

And I am very conscious of being the successor to Philip Ruddock whose friendship with the Chinese Community runs very deep. Philip famously staked his political career on the principle of a race blind migration policy nearly 30 years ago.  And I honour his contribution.

The contribution of Chinese Australians to this country is very significant. Chinese people have been in Australia since the early days of European settlement, coming in larger numbers during the gold rush and then again after the abandonment of the White Australia Policy.

The history of the treatment of Chinese people in Australia in the 19th and early 20th century does not always show Australia in its best light. But after the Second World War there was, if you will, a New Enlightenment where, having fought and beaten Nazi Germany and Imperial Japan, two nations which sought to propagate the myth of racial superiority, the West reassessed its own attitudes to race and dismantled race based migration programs and other restrictions. I am proud that it was the Liberal Party under Harold Holt and Sir Hubert Opperman that dismantled the White Australia Policy. Today Chinese Australians make a contribution across every field of human endeavour and enrich our country in doing so.

Australia is one of the world’s most successful multicultural societies. Australians are not a racist people but unfortunately people from ethnic minorities do still occasionally experience verbal or physical attacks on the basis of their race. And there are perhaps more of these instances than most Australians would imagine.

In the past five years the Human Rights Commission has received on average of 468 complaints per year alleging racial discrimination.

Some ethnic communities keep data on racist attacks on members of their community. For instance the Executive Council of Australian Jewry, on whose Council I have previously served, produces an annual report detailing incidents of anti-Semitic activity which have been drawn to its attention. Their 2015 report recorded 190 anti-Semitic incidents over the year. Over the past 25 years they recorded 616 incidents of property damage to buildings and/or physical assault of individuals and 1,446 incidents of harassment and intimidation not entailing physical contact.

It is in the context of reports into racist violence 25 years ago that Part IIA of the Racial Discrimination Act, which contains s 18C, came into being.

The balance between maintaining freedom of speech and the protection of the human dignity of people from racial and ethnic minorities is at the core of the debate about s 18C.

Freedom of speech is a vital ingredient in any western liberal democracy. The freedom to criticise ideas in order to change policy and change governments is the very essence of a free society.

There are numerous laws which place fetters on free speech including defamation, contempt of court, sedition, obscenity laws, classification laws, public order offences, laws preventing misleading and deceptive conduct, laws regulating material that can be sent by post and broadcasting and communications laws are some examples of laws which restrain freedom of speech. Laws preventing hate speech are in the same category.

… freedom for others as well as for ourselves: freedom for people who disagree with us as well as for our supporters; freedom for minorities as well as for majorities. Here we have a conception which is not born with us but which we must painfully acquire. Most of us have no instinct at all to preserve the right of the other fellow to think what he likes about our beliefs and say what he likes about our opinions .… why is this freedom of real importance to humanity? The answer is that what appears to be today’s truth is frequently tomorrow’s error. There is nothing absolute about the truth. It is elusive … Hence, if truth is to emerge and in the long run be triumphant, the process of free debate – the untrammelled clash of opinion – must go on.

Menzies was correct. Freedom to criticise ideas is absolutely vital. People must be free to say what they like about the beliefs and opinions of others. But in the same speech Menzies also observed that this freedom comes with responsibility:

It is a good rule, not only of common law but of social morality, that we must so use our own [freedom] as not to injure others. The man who claims too much aggressive liberty for himself may be getting it at the expense of somebody else. Liberty is for all, not for some.

Menzies wanted to “create a society in which rights and duties are recognized and made effective.” This required Australians to “be quick to discharge our duties and modest about our rights.” Today we are too quick to insist on our rights and too slow to exercise our responsibilities. We forget that our rights need to be balanced against the rights of others. Menzies recognised as much in another speech “Freedom in Modern Society“ where he said that:

the whole principle of individual freedom in an ordered society is not ‘ Each for himself and the devil take the hindmost’ but as the lawyers would say Sic utere tuo ut alienum non laedas – So use your own that you do not injure another’s.’ This great maxim is not only at the root of much of our civil law; it is the whole basis of civil order, since it states with precision the limits which we must always be willing to place upon our own liberty if true social liberty is to be achieved. The maxim serves as a constant reminder that we cannot decently or sensibly talk about our rights without also admitting our duties. By drawing attention to the existence of others and the rights of others, it has a lesson to teach to all sorts of people, from road- hogs and profiteers at one end of the numerical scale to intolerant majorities at the other.  Here, indeed, is the final though paradoxical, truth:  that although the essence of democracy is that the majority shall rule, democracy can never be the real instrument of freedom unless its majorities are constantly tender for the rights of their minorities.

Robert Menzies recognised both the need for free speech and the protection of minorities as part of the liberal tradition. Free speech is necessary to allow people to debate ideas and change their minds for society to progress. But we also need protections for minorities from being attacked about personal characteristics they cannot change like their race, colour and national or ethnic origin.

For some years there has been a debate in Australia about the protections offered under ss 18C and 18D of the Racial Discrimination Act 1975 (Cth).

Section 18C makes it an offence to do a public act which is reasonably likely, in all the circumstances, to offend, insult, humiliate or intimidate another person on the basis of their race, colour or national or ethnic origin.

Section 18D, provides a defence to 18C, if the act in question is done reasonably and in good faith, in the performance, exhibition or distribution of an artistic work; in academic, artistic or scientific discussion or debate; in making a fair and accurate report; or in making fair comment on matters of public interest.

I have always been a supporter of appropriate laws designed to prevent hate speech including s 18C of the Racial Discrimination Act.

During the election campaign, in my electorate, I was asked regularly about my support for s 18C. The argument I made was that we should be able to robustly criticise people for bad ideas while not attacking people on the basis of their race.