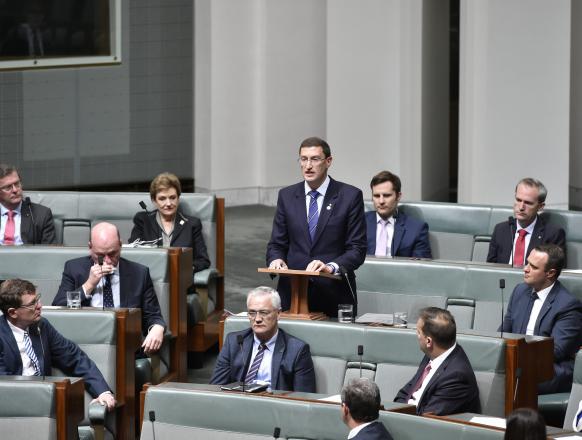 I too am a member of the Parliamentary Joint Committee on Human Rights, and I acknowledge my friend the member for Brand, thank her for her comments and say that I enjoyed working on the committee with her also.

I rise to speak today in support of the recommendations made by the Parliamentary Joint Committee on Human Rights. The committee’s report marks a historic breakthrough in what has been a long and difficult debate on section 18C of the Racial Discrimination Act. Section 18C has been an intractable political issue since 2011. Both sides of the debate have dug into their trenches around the principles of freedom of speech and the need for protection from serious abuse on the basis of race. For the first time, this report provides a path to fix the problems with section 18C, while maintaining its important role as a limited protection against serious racial abuse.

Since last November the Parliamentary Joint Committee on Human Rights has been conducting an inquiry  into the operation and administration of part IIA of the Racial Discrimination Act. The inquiry has received submissions and heard evidence from a full range of interested parties, including complainants, respondents, jurists, academics, administrators, news organisations and Indigenous and ethnic communities. In total the inquiry received more than 11,000 submissions and heard evidence from 100 witnesses. The great success of this inquiry is that it has revealed the underlying problem that has fuelled the debate on section 18C—that is, that the problem lies with the way the law has been administered, and on that point there is bipartisan consensus.

The process for handling section 18C complaints as it currently stands can be slow and onerous for respondents and is at odds with the case law. The threshold for making a complaint is so low it is virtually redundant. The problem with having such a poor administrative process is that it makes section 18C seem to nonexperts to be much broader than it actually is. The way the law has been administered, including the extremely low threshold for making a complaint—sometimes only one line dashed off in an email—has totally undermined the original intent of the provision. The ability to make complaints based on little information, almost a year after an action was taken—as in the QUT case—has understandably warped the public perception of 18C, which was always designed to be a very limited protection available for the most serious type of complaint.

Over the course of our inquiry, we have heard from scores of people who, despite having vastly different views on section 18C, have all agreed that the complaints-handling process needs to be fixed—or, as some put it to us, the process is the punishment. The QUT case illustrated the problems with the administration of the law. During the inquiry, we heard from some of the students, who shared with us the terrible story: not knowing a complaint had been laid against them for a year, being hauled before the commission and then taken to court. Over a period of years, they incurred significant cost in time, money and damage to reputation, only to have the complaint brought against them struck out as having no reasonable prospect of success.

We also heard from the cartoonist Bill Leak, who spoke of the stress and anxiety he suffered throughout the process, despite the clear artistic exemption that should have seen the complaint rejected instantly. The need for process reform has been raised by all comers in the debate. For instance, Ms Helen Kapalos, chair of the Victorian Multicultural Commission, made the following comments about focusing on process change:

The President of the Federation of Indian Associations of New South Wales, Dr Yadu Singh, appeared before the committee and noted that the QUT case highlighted problems with the process. He told the committee:

… I believe the Australian Human Rights Commission Act should be amended so that the complaint-handling process could be streamlined.

The Institute of Public Affairs has been a vocal supporter of repealing section 18C and has conceded that process changes would be an improvement in the law. Even the commission itself recognised the need for changes to the way the law is administered. The process changes recommended by the committee’s report will address these problems identified by the hard cases like QUT and Bill Leak and make sure that they do not happen again.

On this point I would like to note the comments of Tony Morris QC in today’s Australian. Tony Morris is the lawyer for the QUT students. He is a hero to many fair-minded Australians for offering his services pro bono  to the students. Tony Morris is a supporter of the repeal of section 18C, but his contribution illustrates why the reforms to the complaint-handling process are so important. I want to draw the attention of the House to those comments because they are very, very significant. Mr Morris told The Australian:

When you analyse all the impediments that they – And, in this, he means the committee – are putting in the way of someone making an unjustified complaint, the reality is they are putting an end to the industry. The recommendations are not what some of us who oppose 18C wanted, but I suspect they will do  the job.

Mr Morris said that if the recommendations were introduced, a complaint similar to those against the QUT students would go nowhere. “The best part is the combined effect of all the protections they are proposing to put in for respondents to complaints,” he said. “If the report’s recommendations are adopted, it will lead to a level playing field so that respondents enjoy rights similar to complainants.”

Tony Morris’s intervention in this debate is highly significant. We can all take a philosophical position on either side of this issue, but what this committee report does is address the practical concerns raised by the QUT and Bill Leak cases. Taking a practical approach provides us with a way forward for the first time in six years. I encourage all members to consider the report and reflect on it carefully.

Some commentators have suggested that the recommendations do not do anything. Might I suggest that they have a closer look at the report, as the recommendations dealing with complaints handling are highly significant. The recommendations will do a number of things. First, they raise the threshold for complaints so that less serious matters will not warrant consideration by the commission. Specifically, any complaint will be required to allege an act which, if true, could constitute unlawful discrimination. It will set out the need for sufficient details of the allegation, and a lodgement fee will be required to be lodged with the commission. This will set a deterrent for nuisance cases. Penalties will be introduced for legal practitioners who institute complaints that have no reasonable prospect of success and for legal practitioners or complainants who act unreasonably in the process. Second, the processes are designed to create a more level playing field by empowering the commission to give reasonable assistance to respondents to match its current powers for dealing with complaints and complainants, and by imposing time limits on the complaints-handling process—in particular, for notifying respondents. Third, the recommendations give the commission greater powers to terminate complaints, allowing the commission  to terminate earlier and expanding the grounds so that a complaint can be terminated if it is assessed to be unwarranted or have no reasonable prospect of success. Fourth, the recommendations will also restrict access  to the courts following a complaint’s termination by the commission by requiring complainants to seek leave of the court and to provide security for costs before commencing proceedings. Finally, the recommendations will create greater accountability, providing parliamentary oversight for the Human Rights Commission, which has become a law unto itself in the minds of many.

The recommendations are groundbreaking for what they will achieve. First and foremost, they will get 18C off the front pages and allow it to perform its intended function as a limited but effective protection against racial hatred, they will place the onus on the Human Rights Commission and on lawyers operating in this area to get the process right, and they will help bolster freedom of speech by limiting the types of complaints that are deemed worthy of further consideration by the commission.

I know that this report was criticised yesterday for providing the government with options for dealing with 18C, reflecting the diversity of opinion on a bipartisan committee. To be clear, my own preferred option is to codify the test set out by Justice Kiefel in 2001 and repeatedly applied for the last 16 years: that 18C refers to discrimination which must have ‘profound and serious effects, not to be likened to mere slights’. Such a codification will help the public understanding that the words in section 18C have not been given their natural and ordinary meaning but rather that they apply to a more limited range of complaints.

But I want to be crystal clear here: the root cause of the problem is that the legislation has not been administered properly. The way in which the legislation has been applied by the Human Rights Commission has allowed nuisance complaints to be treated with the same level of consideration as serious complaints. When you look  at the problem forensically, try to uncover the root cause and try to properly diagnose so you can prescribe the required medicine, all the evidence indicates that the process is the problem. That is why we have recommended significant and serious process changes. Should these recommendations be adopted, they will go a very long way to bridging the gulf between the public perception of what the legislation does and the reality of its legal application.

It is important that we provide some protection against the worst types of hate speech. Though freedom of speech is fundamental to any democratic society, the Anglo-Australian tradition is not one of unrestrained free speech. The case law on section 18C is settled. It has provided a limited but important protection against Holocaust denial and serious racial abuse against Indigenous people and ethnic communities. At the same time, the defences in section 18D have been described by Professor Adrienne Stone as ‘a set of defences which have no equal in their extensiveness in any law anywhere in the world’, and they have allowed fair and reasonable public comment and artistic expression through cartoons and satire.