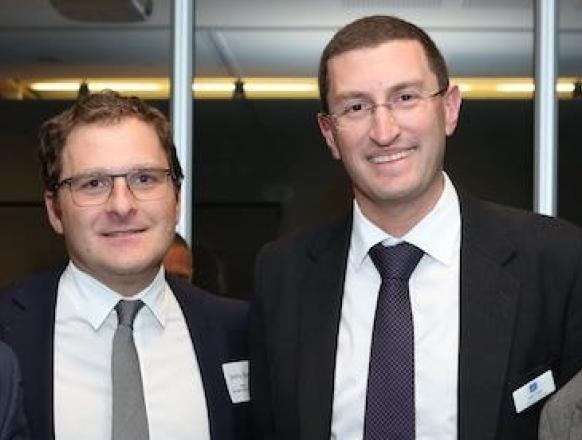 The breaking of so great a thing should make

A greater crack: The round world should have shook

And citizens to their dens.

That’s how I’ve felt since the untimely passing of my friend Jeremy Spinak, the former president of the New South Wales Jewish Board of Deputies, who died last month, aged 36, from the rare pericardial mesothelioma. Jeremy made such an impact in his short life that his passing has made me and others ask: what are we doing with our lives; what sort of contribution are we making; and where is the justice when someone so talented and so giving is taken from us so young?

After the tragedy of September 11, when people were trying to make sense of the madness, Queen Elizabeth II issued a statement, saying:

Grief is the price we pay for love.

Our grief is so strong because Jeremy loved so many, and he was loved by so many. None are grieving more than Jeremy’s family, and today in the gallery we’re joined by Jeremy’s wife, Rhiannon. Condolence motions are usually reserved for former members of parliament. The fact that we’re paying tribute to Jeremy is indicative of the standing he held across the parliament and the country. At one time, Jeremy could very well have come to serve in this place. He spent time working for Michael Costa and Michael Easson, but over the years he lost the partisan urge and instead channelled his efforts into serving the Jewish people.

I’d heard of Jeremy before I met him. In his work in the property industry, he was known to some of the Liberal Party branch members in my electorate—Yves El Khoury and John Vassallo. Although they knew of his Labor background, they spoke warmly of his professionalism and advocacy skills. In fact, John was so impressed by him that he employed him at Celestino.

I got to know Jeremy by serving with him on the New South Wales Jewish Board of Deputies. As president Jeremy united a fractious executive and got people to work together. He didn’t come to office in easy times. Almost immediately, he was hit with the Kashrut commission issue, the Gaza war, the Sydney Morning Herald cartoon incident, and the campaign which was waged against Vic Alhadeff. Jeremy rose to the challenge, dealing with each of these issues in turn. When he was assembling his executive, he asked if I’d consider becoming chair of what is now the Community Relations committee. It was the committee Jeremy himself had chaired. This sounded like a lot of work, and I wasn’t sure I had the time. But Jeremy charmed me into it. That was the sort of bloke he was. He was somebody who could always enlist you in a good cause.

Jeremy had a vision to deepen relationships between the Jewish community and other communities. His strategic vision has been implemented, initially under my leadership and then under the leadership of Gael Kennedy and the indomitable Lynda Ben-Menashe. Our relationships with the Indian, Armenian, Korean, Chinese, Assyrian, Catholic and even Uniting Church, to name a view, are much stronger as a result of Jeremy’s vision.

For me, working on this committee was the single best preparation for my time as a member of parliament, so I have a lot to thank Jeremy for. Over the last few years, Jeremy has done more personal kindnesses for me than I can say. He was always there to encourage me in my political activity or provide counsel when our son was born early and had to go into special care or when he checked in on me when I’d had a hard day here. Even during the leadership challenge this year, he offered me good advice and picked the eventual winner. Somehow Jeremy always knew when to call and what to say. Maybe it’s because we shared a birthday, 25 May. His encouragement was a great comfort to me.

Jeremy achieved more in his short lifetime than many of us ever will. When Jeremy’s one-year-old twins, Grace and Michael, are older, if they ask me something about their dad, I’ll tell them that Jeremy was a man of great humour, intelligence and foresight. He had an amazing sense of civic duty and concern for and pride in the Jewish people. He had extraordinary personal warmth. He had a wonderful way of dealing with people. He could break the tension in difficult circumstances with a joke or impersonation. He had the capacity to bring out the best in the people who worked with him, and if you asked him to do something he’d always back you up.

Jeremy never forgot who he was, why he was here or where he wanted to go. He was a mensch: truly one of best people I’ve known. As we mourn Jeremy’s loss, we must redouble our efforts in the way we interact with each other, in the way we maintain our focus and the way we work together to serve our community, our state and the nation. If we do that then we will well and truly honour the memory of Jeremy Spinak. Zikhrono livrakha—may his memory be a blessing.