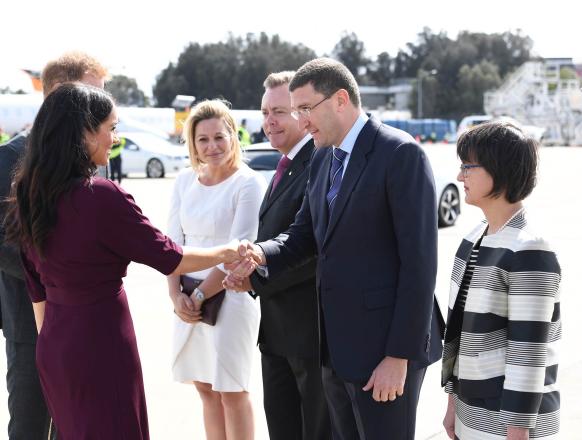 Julian Leeser MP, Federal Member for Berowra, represented the Prime Minister in farewelling the Duke and Duchess of Sussex as they departed Sydney at the conclusion of their first Australian Tour.

Mr Leeser discussed parenthood with the couple who are expecting their first child in spring 2019.

“I told the Duke and Duchess of Sussex that we had a six-month-old boy, James, at home and we knew how exciting this time can be,” Mr Leeser said.

“People can try and tell you what to expect but nothing can describe what actually happens and the emotions you feel when you become a parent. It is the most remarkable experience. I wish the Duke and Duchess all the best for this life-changing next chapter,” Mr Leeser said.

Mr Leeser is the Chair of the Parliamentary Friends of Suicide Prevention Group and congratulated Prince Harry on his tremendous work in the area.

“I can’t think of anyone who has personally done as much as Prince Harry to support wounded veterans and draw attention to the challenges they face when returning home from the battlefield.”

“Prince Harry complimented Australia on having some of the best early-intervention programs in the world. It’s great to hear Australia has a reputation for being world-leaders in tackling mental health issues,” Mr Leeser said.

Building on the success of the Invictus Games, on the weekend, the Government announced the formation of the Australian Defence Force (ADF) Sports Cell, led by the Department of Defence with support from the Department of Veterans’ Affairs (DVA). It will channel serving and ex-serving members into national and international adaptive and non-adaptive sports programs, including the Invictus Games.

“Our Government is committed to helping ex-serving personnel transition into civilian life. Sports programs build community through physical activity and mateship. This has been demonstrated to be an extremely effective tool in supporting their transition,” Mr Leeser said.