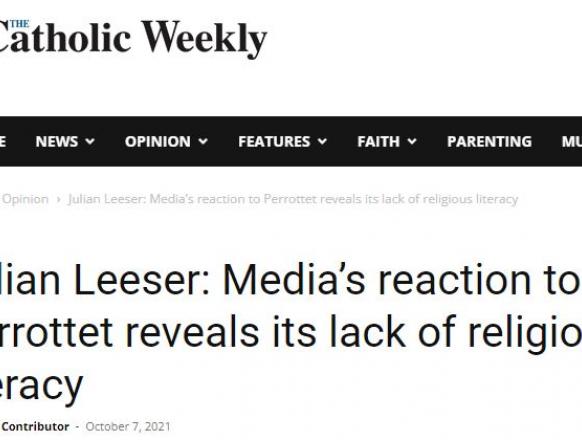 Catholics are a fundamental part of Australian society.  Having leaders formed by a faith that values the dignity of every person as its central tenet is fundamental to the moral ecology of Australia.

The teachings of the Catholic Church are universal.  Its values have inspired people across the Australian political spectrum from Bob Katter to Anthony Albanese to Christine Milne. Its adherents are found in every suburb, every income level  and every ethnic background.

But the elevation of Perrottet as Premier has caused the media to focus on his religion as if it was completely alien from the Australian experience.

On ABC Online,Ursula Malone wrote “the Catholic father-of-six will have to work hard to connect with women voters who do not share his religious and conservative views.”

Maryanne Taouk and Paige Cockburn described his family ideals as “fierce” and his Catholic beliefs “devout” and noted that the schools he attended and sends his children to have a world view associated with “secrecy, sexism and misogyny”.

Those schools are in my electorate. Tangarra, where Perrottet send his daughters, regularly invites me, a Jew, to speak to the students about leadership. I have not observed any of the things that Taouk and Cockburn allege.

Radio presenter Kyle Sandilands said of Perrottet “Oh this guy’s gotta go, he’s never allowed on the show”. Sandilands said his personal beliefs would “get in the way”. This after Perrottet defended Sandilands following his comments about the Virgin Mary last year.

The Sydney Morning Herald published an op ed by Stephanie Dowrick  where she accuses Perrottet of “views that represent the most extreme end of a rigidly male-dominated institutional church”  and a “fundamentalism” where “high levels of conformity are demanded; to doubt, self-question, is unwelcome or forbidden” all of which misunderstands the true nature of Catholicism.

So many in the Australian media start from the premise that Christianity and Catholicism, in particular, is a minority for suspicion.

The anti-religious nature of some sections of the media should concern us all. One day we will have political leaders who are not Jews, Muslims, Hindus or Sikhs. The deputy leaders of the Liberal Party federally (Josh Frydenberg) and in Victoria (David Southwick) are both Jewish. And I look forward to the day when Jihad Dib, Ed Husic or Anne Aly – great political talents who happen to be Muslim – lead the Labor Party.

As Australia’s religious diversity increases, the media needs to display a greater understanding of faith. And the ABC, as the national broadcaster, ought not view religion with the automatic suspicion which regularly greets it across its programming.

Australians are a faith-filled people, 60.34% of us list a religion on the census. Christians comprise 52% of our population and Catholics which are the largest single denomination of any faith group in Australia comprise 22.6% of us. Catholic schools and universities educate us, Catholic hospitals look after us when we are sick and Catholic social welfare agencies pick us up when we are down. They are open to people of all faith and of none. I have worked for one of those organisations and served on the board of another.

In the early days of the AIDS epidemic, when those impacted were being shunned by many in the health system it was the compassion of Catholic hospitals that cared for the suffering.

Yet the ABC starts with the proposition that Catholicism is something to be feared.

America’s first Catholic President John Fitzgerald Kennedy had to fight off allegations of divided loyalties when he stood for election. Kennedy saw the presidency as “a great office that must be neither humbled by making it the instrument of any religious group, nor tarnished by arbitrarily withholding it, its occupancy from the members of any religious group.”

It seems sections of the media would favour the ‘arbitrary withholding’ Kennedy was seeking to avoid 60 years on. Kennedy sadly observed that “Anti-Catholicism is the anti-Semitism of the intellectuals.”

Dominic Perrottet is one of the State MPs in my electorate. I have known him, his wife Helen and his broader family a long time. He is the sort of bloke you’d love as a neighbour. The fact that he has six children means that like many Australians he understands what it is to juggle work with the demands of family life. The fact that he takes his faith seriously too will be a comfort to millions of Australians of every faith and none who will identify with a leader who has a discernible set of values.