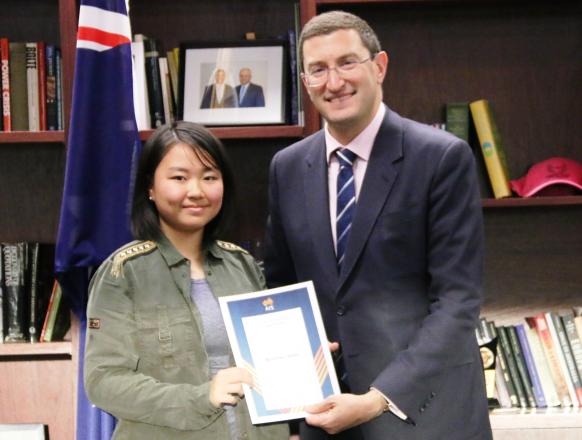 The Local Sporting Champions program provides successful applicants with up to $700 that can be put towards the cost of travel, accommodation, uniforms or equipment when competing in recognised competitions.

Many of Berowra’s Local Sporting Champions, representing very diverse and interesting sports, gathered for a celebratory afternoon tea, where they shared stories of success.

Among the recipients of the grant present at the celebratory commemorations were:

One of the Local Sporting Champions, Hannah Shen, is a fencer, specifically practising sabre fencing.

Hannah says “Fencing is very mentally challenging. There are 3 types of weapons in fencing, which are the Foil, Epee and Sabre. The fencing I do is Sabre.

“When I am fencing, I have many strict rules to follow and most of the time I have to react and know what to do in less than a second. In every single game I have to have a hundred percent focus and concentration and I need to stay calm for the entire game to defeat my opponents.”

Many of our athletes have significant challenges to overcome to get where they are today. Hannah has had her own setbacks as she has pursued fencing.

“I had a hard time dealing with my serious knee injury which was caused by over use since the end of 2017. I went to visit a lot of physiotherapist and did a lot of fitness. I also went back to China to looking for acupuncture treatments.

The Federal government Sporting Champions grant enabled Hannah to compete at the 2019 Junior National Competitions in Melbourne where she competed in the adults’ competition.

“In February this year, I went back to regular training and attended the Australian Junior National Championships. It was my first comp after injury for almost a year and a half. I achieved first in women’s individuals and our team made into the top 3, I was very pleased about my results and I am looking forward to more competitions later this year.”

Julian Leeser MP said “Our local sporting champions are very deserving of our support. I’m glad I can assist them in their endeavours by providing financial support.”

“Sport plays an important role in the development of children. It teaches the importance of discipline, goal setting, sportsmanship and striving for our personal best,” said Mr Leeser.

“There is no doubt that each of these sportsmen and women possess and demonstrate each of these qualities in their pursuit of excellence in their respective sports.”