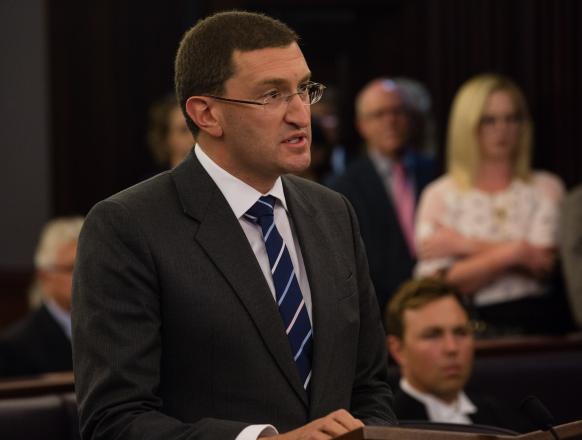 It is an honour and a privilege to deliver this address to commemorate the 72nd Anniversary of the Liberation of Auschwitz on 27 January 1945, a day which is known as International Holocaust Remembrance Day.

Today I am going to do three things:

On a per capita basis, Australia is home to more Holocaust survivors than any other nation. Holocaust Survivors changed the face of the Australian Jewish community and the broader nation with the contribution they made to this country. From businessmen like Frank Lowy, to Chazzanim like Michael Deutsch who taught me my parsha, to artists like Judy Cassab, they and thousands of others picked up their lives and took the opportunity to live and serve this wonderful, free country.

What Do We Remember Today?

Today we recall the liberation – the beginning of the end of what Churchill called the “perverted science”: the myth of racial superiority which led to the death of six million Jews. A figure that represented nearly two thirds of the Jewish population of Europe, as well as the murder of:

“We came upon groups of people in striped uniforms. They were no more than skeletons. They were unable to talk. They had a blank look in their eyes …We told them we were the Red Army and had come to free them. They began to feel our uniforms as if they didn’t believe us. We washed and clothed them and began to feed them… We saw everything. The chambers used to gas the prisoners, ovens where the bodies were burned. We saw the piles of ash. Some of my men approached me and said ‘Major, we cannot stand this. Let’s move on.’“

Journalists from the 38th Army, Usher Margulis and Gennady Savin, entered the camp after the soldiers.  This is what they found:

“We entered the brick building and looked around the rooms. The doors weren’t closed. In the first room there was a huge pile of children’s clothes: little coats, jackets, sweaters, many of them with bloodstains. In the next room there were boxes filled with dental crowns and golden dentures. In the third room there were boxes with woman’s hair. And then a woman (a prisoner – RBTH) brought us to a room filled with boxes with women’s bags, lampshades, wallets, purses and other leather items. She said: “All this is made from human skin.”

Primo Levi in The Truce wrote of his own liberation from Auschwitz by the Red Army that day in January 1945:

“They did not greet us, nor did they smile; they seemed oppressed not only by compassion but by a confused restraint, which sealed their lips and bound their eyes to the funereal scene. It was that shame we knew so well, the shame that drowned us after the selections, and every time we had to watch, or submit to, some outrage: the shame the Germans did not know, that the just man experiences at another man’s crime; the feeling of guilt that such a crime should exist, that it should have been introduced irrevocably into the world of things that exist, and that his will for good should have proved too weak or null, and should not have availed in defence. “

In April 1945, General Dwight D. Eisenhower, Supreme Commander Allied Forces in Europe, wrote to his Chief of Staff, General George C. Marshall, about Ohrdruf, a sub-camp of Buchenwald he had just visited. Eisenhower must have been an amazing leader and a man of extraordinary foresight.  He said:

“The things I saw beggar description…The visual evidence and the verbal testimony of starvation, cruelty and bestiality were so overpowering… I made the visit deliberately, in order to be in a position to give first hand evidence of these things if ever, in the future, there develops a tendency to charge these allegations to propaganda.”

Eisenhower was instrumental in organising delegations of politicians, journalists and filmmakers to view firsthand what had happened in the death camps in order to bear witness what was then, it is hard to imagine now, a skeptical public. One journalist was asked by a colleague if the scenes in the camps were as bad as they were described in the newspapers.  He responded, “No, they are worse.”

The Importance of Education

Having recalled the horrific discovery of that day, I want to move to the theme of this year’s commemoration: the importance of education.

It is our privilege to have known, met and heard the stories of the Holocaust survivors. They have been our family, our neighbours and our friends.

I remember the Bondi Beach of my childhood, where heavily suntanned old men would walk along the beach talking in European languages or speaking in English with thick European accents. I remember the Double Bay of my childhood, where women with big hair and the same European accents would dote on their grandchildren. The bravado of those conversations in both cases saddened when you looked closely at their arms and saw the tattooed numbers that branded them for life as survivors of the Shoah.

I remember going to see Katie Popp, a German woman in her 80s with dark olive skin and her grey hair in a bun. She lived in the Dorian Towers apartment building in Double Bay. Katie would make my brother and I German cakes and sew the name tags on our school socks. She had two budgerigars that would sing to each other and that she would whistle at. She pronounced her Gs and Js as “ch”, so that Germany became “Chermany” and Julian became “Chulian”. As a child, she seemed to be old friend of my grandfather’s and when they did not want me to know the secrets they were talking about the English would switch to German.

It was only as I got older, that I learned that Katie helped to get my family out of Germany in 1936. She was Catholic, she had been the family housekeeper and she knew things were going bad when some shopkeepers refused to serve her because she worked for a Jewish family and she took risks to smuggle my grandmother and her brother to Switzerland, and then to England and finally to Australia in 1936.