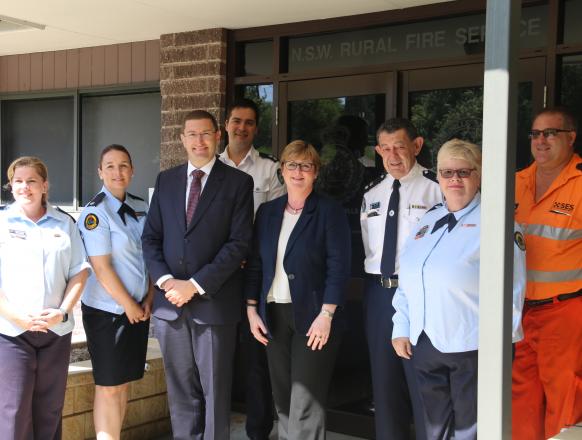 “I am pleased to show the Assistant Minister the work the NSW SES, NSW RFS and local authorities have been doing to repair the extensive damage to homes and property in Berowra as a result of the severe storm we were hit by in December,” said Mr Leeser.

Assistant Minister Reynolds met with local residents and key representatives from the NSW State Emergency Services (SES) and Rural Fire Service to thank volunteers for their response to the storm.

“I was overwhelmed by the way the Berowra community rallied together during challenging circumstances and joined in the response effort,” Assistant Minister Reynolds said.

“From helping to fill sand bags, door knock homes, deliver equipment and pick up lunches, it was a remarkable act of unity.

“I hope to see the Berowra model of ‘spontaneous volunteering’ replicated across the country.”

Julian Leeser MP also gave a speech in Parliament to recognise the outstanding work of emergency services and offer support to those affected by fire, floods and storms during the recent summer period.

On 20 December, severe storms hit the Berowra district, with Berowra, Cowan and Berowra Heights being smashed by hail the size of golf balls. Three and a half months later, the suburbs remain a sea of tarpaulins.

However, Mr Leeser said that he could not be more impressed by what was revealed in Berowra when the storms hit.

“Without fail, the stories I heard from those days were of neighbours prioritising one another, putting themselves last to make sure others had what they needed.”

“The SES found themselves swelling in numbers as people across the community spontaneously volunteered, putting on vests and signing up to help their neighbours. Trucks came from as far away as Lightening Ridge and Broken Hill to offer whatever help they could.”

It is estimated that the number of hours emergency workers gave to Berowra over 9 days, including on Christmas Day, was 23,000.

Mr Leeser acknowledged some of the extraordinary emergency service workers and volunteers. He also shared stories from the community about the selflessness of neighbours, such as Dennis Greene and roofer Michael Solomon, who put others before themselves after the storms.

“Sometimes we are told that our communities are fragmenting and that people aren’t like they used to be. The experience in Berowra is anything but that.”

“But we need to remember that a disaster doesn’t end when the crisis is over and the news crews leave.”

Berowra residents are still feeling the impacts of the storms, with families and businesses struggling to return to life as normal. Mr Leeser urged insurance companies to ease the burden on Berowra residents.

“The Federal Government has pledged support through the disaster recovery arrangements. Support will be given to people without insurance; to community groups; and to fund public assets that have been damaged. This again, will be important as the long recovery process takes place.”