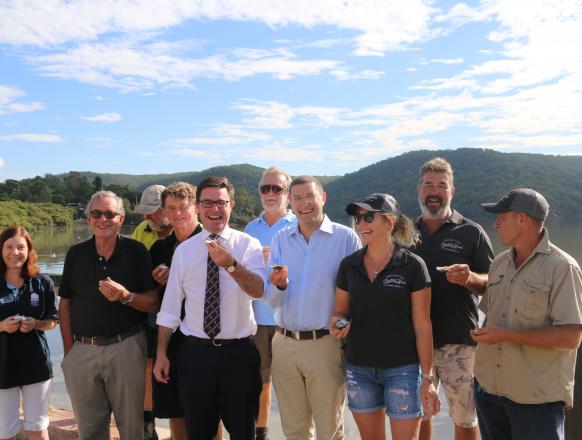 Hawkesbury River oyster farmers whose businesses have been crippled in recent years, will benefit from new Federal Government funding to develop disease resistant oysters in the Hawkesbury River.

In 2013, the viral disease, known as Pacific Oyster Mortality Syndrome (POMS) was first diagnosed in the Hawkesbury River. The disease is harmless for humans, but its effects were devastating for Hawkesbury River farmers, resulting in a 98% loss of oyster stock.

“Sadly, oyster farmers on the Hawkesbury River have not had an income from oyster farming, since 2013. This funding will help them revive their iconic industry,” says Minister for Agriculture and Water Resources, David Littleproud.

The newly granted funding will allow for the completion of an innovative program proposed by Hawkesbury River growers.

The program will operate in conjunction with Cameron’s Oyster hatchery in Tasmania, which will produce Triploid Pacific Oysters to be translocated under a biosecurity import protocol into the Hawkesbury River. Eight oyster farmers will receive the oysters as the first step in reviving a sustainable local oyster industry with the help of POMS resistant genetics.

“The Hawkesbury River oyster farmers have been doing it tough since 2013. This trial will not only benefit the farmers here, but will have significant positive benefits for other oyster regions in NSW, SA and Tasmania. It will be the first time this class of oyster will be tested in the field nationally,” says Steven Jones, an oyster farmer and consultant from the Hawkesbury River.

“Hawkesbury River farmers have long worked alongside scientists from many institutions to get to this point and we are looking forward to once again producing some of Australia’s best Pacific Oysters.”

“I couldn’t be more impressed with the people who live and work on the Hawkesbury River,” says Julian Leeser MP.

“Some of these farmers are the third or fourth generation in their family to be doing this work. It would be an absolute tragedy if oyster farming on the Hawkesbury ended. Before the last election I promised to do what I could to help support the industry. I have been working hard to put their case to my colleagues in Canberra. Hopefully this funding will provide some new opportunities for the industry,” says Julian Leeser MP.